Letter to the Wichita County Community Regarding School Building Closure 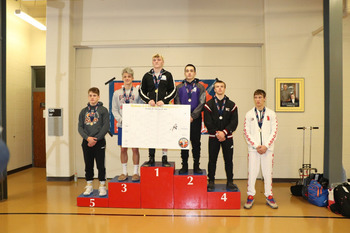 Jesse Gardner traveled to Hays last weekend to represent the Indians wrestling team in the 3-2-1A state wrestling tournament.  Gardner finished his season with a 4th place finish.  “Being one of the top four wrestlers in the state is a great accomplishment.  Coach Niswonger and I were very proud of the effort and toughness Jesse showed this season,”  said Coach Brown.  Gardner is a junior this year at Wichita County and will have one more season to work for a state title.

Gardner opened the tournament in dominating fashion with a 44 second pin over his first opponent, Dylan Smith, from Atchison - Mound Hill.  In the quarter finals, Gardener also won handily in an 11-7 decision over Colt Eck from Uniontown.  In the semi-finals, Jesse came up against Luke Horn of Riverside, the eventual state champion, and came up short losing by fall.  Despite the loss, Gardner was in good position for a medal beginning the second day.

On day two, Gardener dominated Waubaunsee’s Derek Wallin, winning a 14-0 major decision.  This set up a consolation finals match for 3rd and 4th place.  In the consolation finals, Jesse met Anthony Signs from Wellsville, the #2 ranked wrestler in the state and lost by decision finishing 4th.  “It is no easy task to bring home a medal from state, and Jesse wrestled very well.  He takes this sport very seriously and is always working toward improvement, including continuing on this season in Kansas Kids, and wrestling freestyle over the summer.  The work he puts in will continue to pay dividends and we will be looking forward to another successful campaign next year,” said Brown.

Thanks to all the Indians fans who supported the entire team this season, traveling with us and cheering all the wrestlers on.